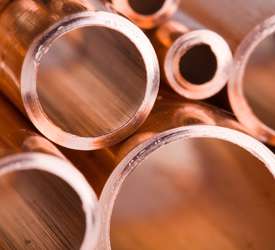 It's an unfortunate and growing problem across the warmer regions of the country and especially in Florida. Every day, homeowners are discovering that their central AC units have been stolen. Thieves like to go after the units for the large amount of copper they contain, typically about $100 for an average AC unit. Like thefts of wire or vehicle catalytic converters, the item is sold to a materials scrap yard.

It’s not an easy problem to solve for many homeowners, who often install the units outdoors where they are easily visible and accessible to thieves twenty-four hours a day. Besides the significant financial loss of the equipment itself, they face the task of filing an insurance claim, probably eating the deductible, and a sick feeling of victimization in and around their home.

As a result of this spate of materials-related thefts, the State of Florida has adopted a new law requiring scrap yards to obtain proof of ownership (for example, a receipt or bill of sale) when recycling certain items. Included on this list is "any aluminum, copper, or aluminum-copper condensing parts or the evaporator coil, including the tubing or rods from air-conditioning and heating systems," excluding parts from window AC units or motor vehicle systems. Also on the list are a variety of commonly-stolen items, everything from manhole covers and brass fittings to guard rails and shopping carts.

There are a few ways of securing your exterior AC unit. Some would appear unsightly to some people, but you can create an effective system for your particular needs by mixing and matching different countermeasures.

In general, good home security is about designing a system whose elements overlap and complement each other, so don't be afraid to experiment.

The simplest option, crude and effective, is an AC cage. It's pretty much what it sounds like. This reinforced steel box fits over the AC unit and can be locked down. Besides being effective at securing the unit, its rugged looks discourage thieves from even making an attempt. They’re extremely effective, working night and day, whether you’re home or away.

Another option is a surveillance camera. Coupled with a warning sign, a motion-activated video camera and motion-activated light are a good way to make thieves consider another target. This is a cost-effective way to balance a few elements into a workable security system, and doesn’t distract from the rest of the yard.

Don’t forget low-tech options, either. Simply installing the unit on your roof or concealing it with a little new landscaping, goes a long way towards decreasing the likelihood of being noticed by thieves. Finally, there are even GPS-enabled tracking devices such as A/C Trax, which are also highly effective.