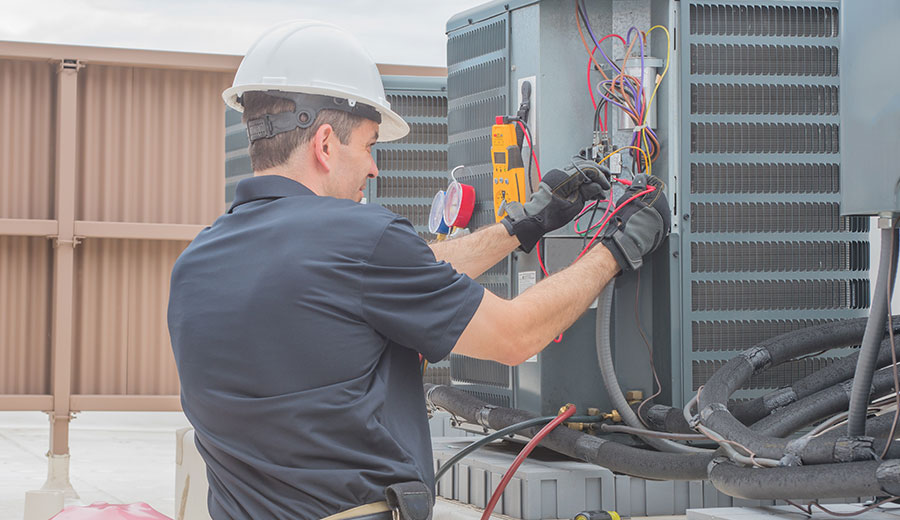 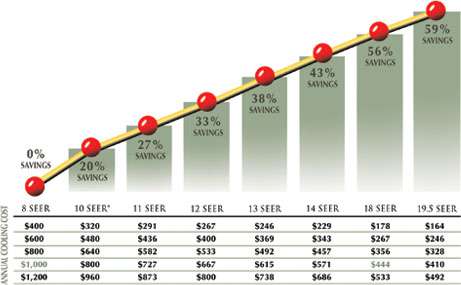 When it comes to central air conditioners, energy efficiency is one of the most important selling points, particularly for those of us who live in Florida. After all, many of us use our air conditioners for the majority of the year, and we don’t want our energy bill to go through the roof.

To make it easier for us to select the right air conditioner for our budgets and needs, the U.S. Department of Energy developed a simple rating system known as the Seasonal Energy Efficiency Ratio or SEER. In 1992, the minimum SEER Rating was set at 10 for air conditioners manufactured in the United States, and the Air Conditioning, Heating & Refrigeration Institute (AHRI) was tasked with rating every air conditioner.

The SEER Rating can help you determine your air conditioner’s efficiency and resulting operating costs. On most A/C units, the rating can be found on the yellow sticker labeled “Energy Guide.” It can also be found with the model and serial number, near the top of your A/C unit’s manufacturer label. The SEER Rating is certainly not the only thing you want to take into consideration when comparing air conditioners, but it’s a good place to start.

The SEER Rating is calculated by taking the total cooling output (measured in British Thermal Units or BTUs) provided by the A/C unit during its normal annual usage period divided by its total energy input (measured in kilowatt-hours or kWHS) during that period.

The higher the SEER Rating, the more efficient the air conditioner. Or you get more cool air by using less electricity.

Explained in another way, SEER is very similar to the efficiency rating system used in automobiles -- MPG or miles per gallon. The more miles you get per gallon of fuel, the more efficient the car.

In 2015, the minimum SEER rating was raised from 13 to 14 in many Southern states, including Florida. The higher range from a rating of 18 to 25. Prices vary depending on your needs, but you can find them from $3,300 to $8,000. Lower-rated A/C units are less expensive, and in turn, cost more to operate.

To put this into perspective, air conditioners have come a long way since the mid-1970s. Today's highly rated SEER air conditioners use 30% to 50% less energy to produce the same amount of cooling as air conditioners from that era. Even if your air conditioner is only 10 years old, you may be able to save 20% to 40% on cooling costs by replacing it with a new energy-efficient A/C unit that has a higher SEER Rating.


How Much Does a Higher SEER Rating Save You per Year on Your Energy Bill?

Below we provide a SEER Savings Table based on averages from the Tampa, Florida, Air Conditioning Market.

To calculate these numbers we had to make some assumptions. 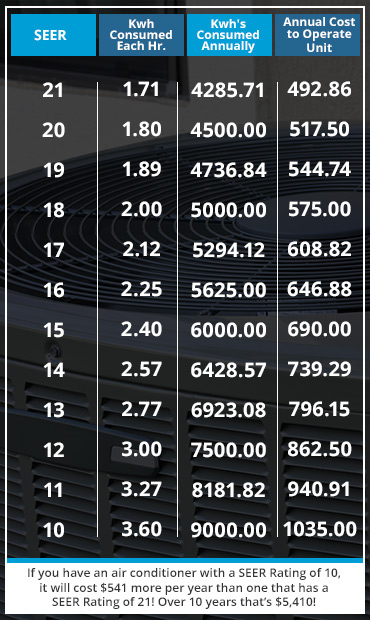 As you can see, the savings between each SEER Air Conditioner Rating Point is approximately 5%. It might not seem like much, but if you have an air conditioner with a SEER rating of 10, it will cost $541 more per year than one that has a SEER rating of 21! Over 10 years that’s $5,410!

By investing a little more upfront, you are sure to save money over the long haul, including the costs you may have to repair your inefficient A/C unit. For example, energy-efficient air conditioners minimize their cycling times, which can help reduce wear and tear on your unit’s fans, motor, and other electrical parts.

In addition, there are also some utility companies that offer rebates or compensation if you purchase a high-efficiency A/C unit. And the U.S. government may even offer tax rebates.

So an air conditioner with a high SEER rating can save you money, but what are some of the other benefits?

Efficiency is the name of the game when it comes to saving money on your home cooling costs. If you are looking for a new energy-efficient air conditioner with a high SEER rating, check out our AC financing options.

If you would like to speak with us about an appointment or have other questions call us today at 813.COLDAIR.